The Sadie and Vedette Penny Arcade premiered as a looping performance installation for private viewing on October 28, 2011.  Guests assembled outside the Penny Arcade, and were led one by one through a narrow hallway and into a Victorian parlor.  The parlor was covered in red fabric and saturated with lilies – suspended with wire from the ceiling and strewn across the floor.  The room contained two floral-patterned chairs at a central table set with two goblets and two plates of edible flowers, a small table with a gargoyle, two stand-up mirrors set at angles, a white dresser holding three mannequin heads, and a writing desk holding a red feathered egg.  Additional materials included lace, velvet, wire, rope, hanging bare light bulbs, electric fan, droning noise, scent of lilies, edible flowers, coin-machine slot box, and flickering lights.

The Penny Arcade Conductor guided guests to assemble in a fourth floor hallway.  Speaking to all the viewers in the hall, the conductor gave the following instructions:

“Welcome to The Sadie and Vedette Penny Arcade.  You are each invited to a private viewing.  Listen carefully to the instructions I will give you now.  I will lead one viewer at a time into the parlor.  In the parlor you will find a bowl of flowers.  After you are seated, you must immediately put something from the bowl into your mouth.  Then, you will need to drop 5 cents into the coin machine slot box. I repeat:  in order to start the show, you must eat from the bowl of flowers and drop 5 cents into the coin machine slot box.  Once the show begins, you may certainly continue to eat.  When the show concludes, please exit immediately.” 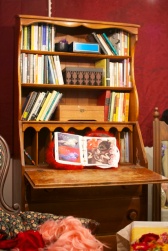 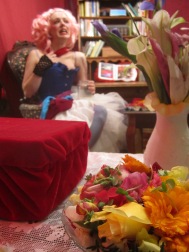 “I enjoyed the lavishness and also the cut-throat idea that was coming occasionally to the forefront from the shadows. I was wondering what my role was, what could happen in the dark, and if I stayed too long and became noticed–what would happen. potential victim? Loved your attire as well. I also wondered what it would be like as a man eavesdropping on female babble. How the experience would be for me if I were not privy to such talk already. Like being in on a secret. I felt like I was totally busted gulping that flower. Then I simply enjoyed it.”
~ Audience member

The Sadie and Vedette Penny Arcade was written, designed, and built by Katrina Schaag.