The project is a digital extension of my feminist erasure poetry project “The Infinite Woman,” which performatively excavates the voice of the female protagonist encased within a male-authored, first-person fictional narrative: Edison Marshall’s novel The Infinite Woman (1950), based upon the life of the historical figure Lola Montez / Eliza Gilbert. I manually extracted and rearranged sentences from the book containing the word “I” in order to recontextualize the voice of the female protagonist within a nine-part post-conceptual lyric poem. My erasure satirizes the novel with a melodramatic tonal and affective register, but also produces surprising moments of imaginative feminist agency.

The app will digitally recontextualize the voice of “the infinite woman” as a machine, using a word-based markov chain to computationally deploy poetic techniques of erasure (removing or extracting existing language to reveal patterns) and remix. To further interrogate the fantasy of an eternal feminine essence, the app will remix Marshall’s The Infinite Woman with Simone de Beauvoir’s The Second Sex: it will extract sentences containing “I” or “woman” from both books, and then combine the two texts by splicing sentences and assembling fragments to generate new sentences. Meanwhile, a fog at the edges of the screen will threaten to eclipse the page and erase the text.

The main page will scroll infinitely with randomized sentences that appear on separate lines, performing the project’s impossible temporality. The computational code that produces the infinitely scrolling sentences is a metaphor for the social scripts that govern repetitive gendered utterances. 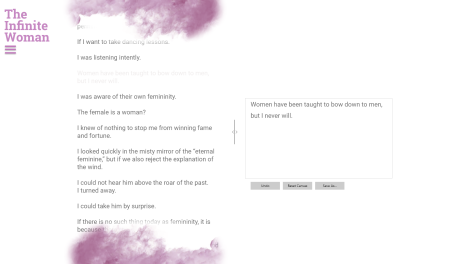 The user will be able to pull sentences from the infinitely scrolling text into a canvas to create their own linguistic erasures and recontextualizations.

I am interested in how the form of the book is impacted by the interactivity, responsiveness, ephemerality, and open-endedness of digital experiences, and I am conceiving this app as a continuously mutating digital book. The project explores the impact of digital media aesthetics and computational techniques on scholarly and creative explorations of narrative voice and agency.

To learn more about the project, watch this video my wonderful student collaborators made:

One response to “Digital poetry app “The Infinite Woman” in development”